Phantom bindings are used in conjunction with an Alpine Touring (AT) boot. The binding draws from the many advantages of an AT boot such as the stiff sole, tech toe connection point, and the lugs at the toe and heel. Yet, AT boots ride like a stiff soft boot due to the pivoting upper cuff.

Phantom bindings are designed to flex and give torsionally, while providing incredibly fast and powerful edge control.
Because Phantoms work in tandem with an AT boot, the binding carries minimal The force created by gravity acting on a mass." class="glossaryLink " target="_blank">weight and bulk. The advantages of this minimal tech style in the backcountry is enormous. The binding weight is also reduced by use of negative space design.

Bail design is pre-adjusted for rapid step in to AT boots. No ratchets or binding straps to adjust each time.

I have had a progression through many stages of different splitboard bindings. Several years ago I rode a splitboard with different types of soft boots. While the decent was what I would expect with any soft boot setup, there were many drawbacks. The main drawback for me personally was the touring ascent. I began finding my comfort zone between 6-12 miles in duration. A soft boot setup on that type of mileage just wasn’t cutting it. The majority of time spent in the backcountry is while touring and terrain selection. I found the soft boot setup to be cumbersome after a few miles.

During spring approaches in to higher altitude terrain, soft boots once again became a frustration. Kicking steps on steep approaches was risky to say the least. I had managed to modify a crampon to accommodate soft boots, but the reality was that soft boots just weren’t made for the type of terrain I was selecting.

I live in the Colorado snowpack, which means that in calendar winter, approaches are often in heavily treed or rocky areas. While descending the Dragontail Couloir in Rocky Mountain National Park, I had the misfortune of catching a toe-side edge on a rock submarined just below the surface. This was partly due to my own stupidity, and partly due to the cumbersome toe bail projecting high on the Voile plate system. In essence, the rock caught the toe bail, shattered it, and left me with one foot released on a 45 degree descent. This is about the worst scenario that could happen to a snowboarder, and can often mean a tib-fib fracture. While the spectacular sudden fall was a ‘tomahawk’ for a few hundred feet, I escaped with nothing more than a cracked rib from the ice axe and bloody nose.

It forced me back to the drawing board on AT binding set up. I ended up modifying Bomber Trench Digger II bindings on a CNC, which effectively put my foot slightly closer to the deck, and replaced the plastic bail with an aluminum bail. I used this setup for four seasons. The only complaint I really had was the distance from the sole of the boot to the deck. While it is closer than the Voile Mountain Plate system, it still relies on the Voile puck system. The other minor complaint is of course the weight. I stripped out everything I could possibly strip on the modified Trench Diggers, but still found the weight of the entire Voile system to be less than desirable.

During the winter of 2012/13 I was first introduced to a prototype hard boot binding known as Phantom Splitboard Bindings by a friend, Rick Gaukel. Later that season during the 2013 Silverton Splitfest I had the opportunity to demo Phantom Bindings. I summited and descended both Grand Turk and Red Mountain #3 with the Phantoms. I was so impressed I almost cried when I returned to the setup I had been riding on. It would be two years later almost to the exact date I would finally own and permanently mount the Phantoms.

The Phantoms are a complete game changer in alpine touring (AT) splitboard bindings. Just like a Dynafit brought the ultimate tech binding to the AT ski world, Phantoms bring the same solution to the table for AT splitboard setups. Plain and simple, the Phantoms are engineered by completely rethinking the touring and ride transformation. To start, Phantoms completely eliminate the traditional Voile puck interface, allowing the biding to mount much closer to the deck under foot. In terms of physics this makes all the difference in the world. Imagine transferring lateral  A physical energy that can push or pull on something. Your weight is the force that you push on the earth with, when there are no other accelerations." class="glossaryLink " target="_blank">force higher on the deck as opposed to closer on the deck. 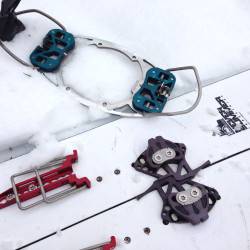 Phantoms work flawlessly with the dynamics of an AT hardshell boot, and offer all the advantages of touring, side-hilling, and boot-packing in an AT boot. This is especially important on steep approaches while kicking steps. AT boots also accept a crampon with minimal effort using the lugs of the AT boot design. Phantom bindings offer control and contouring when riding on the descent that is equivalent or better than a snowboard soft boot.

Just how easy is the transition from tour to ride mode? Check out this video from Jason Bushey.

Touring in an AT boot with a Dynafit toe piece is the most efficient mode of touring. Touring in an AT boot relies of just the fulcrum of the boot toe-piece with a Dynafit connection. Essentially the boot is merely hinged at the toe while touring allowing for maximum efficiency during glide. This is in contrast to binding systems that stay connected during touring, where one had to lift and pull the entire binding in tour mode. Phantoms merely stow in the pack on the ascent, and touring is performed only with the tech toe-piece.

There are a few different options for the touring setup; Phantoms are available with Dynafit Speed Superlite with a Phantom adapter to match the existing hole pattern on your deck. The package setup, available from Phantom is called the Alpha Tour which includes two tech toe pieces, two adapter plates, and two Phantom risers. Alternatively, you can use other types of tech toe pieces in conjunction with the Sparks R&D adapter.

The Phantom Rocket Dual Risers are designed to take up less real estate than other climbing wires, and still fit the existing hole pattern placing the sole of the boot on the heel of the boot without the need for a Sparks adapter plate (without this adapter on an AT setup, the climbing wires will strike on the arch of the foot during touring due the longer mondo and BSL length of an AT boot). Additional the Phantom Rocket Dual Risers have slotted rails to lock down the rear heel.

There are two main components to the Phantom binding system; the binding and the cleat.

When touring with Phantoms, the binding plate is removed and stowed in the pack. I hardly notice the weight, the Phantom binding weighs just 450 grams each. The previous system I migrated from weighs nearly double that! Transforming to ride mode is a piece of cake, and the difference in torsional flex and initiating turns is just amazing. The bindings also have a three degree cant built in to the binding. Canting is a slight tilt on the footbed of the binding inward providing an ergonomic stance while riding.

Opposing cleats are mounted to the board deck with spring-loaded locking level pins in the binding during ride mode. The cleats weigh in at just 72 grams each. They are adjustable from +30 to -30 degrees, and stance width adjustment is in ½” increments.

A lot of thought, engineering, and physics have been put in to function and design. The lock down to the cleats resides beneath the boot sole, so no accidental release could possibly happen. Likewise the tolerances between the binding plate and cleats make for a much easier time in the transformation from tour to ride mode.

* Weights assume typical AT boot setup systems. Soft boot setups would add the additional soft binding weight as well. This is especially prevalent during when uptracking, caning, bootpacking, or carrying the entire setup on steep approaches.

The overall difference from migrating to the Phantom setup has just been phenomenal. Initiating turns in both powder and pack has been flawless. The difference of having the boot sole closer to the deck makes a world of difference. Edge control down the steeps is completely amazing. Transition times from touring to ride modes is much more efficient. Phantoms have made a huge difference in virtually every condition.

In essence, Phantom bindings are a revolutionary approach to AT splitboarding. They utilize all the advantages of backcountry riding and touring with an AT boot, while still providing the ride and feel of a soft boot.